Genzyme Submits BLA for Myozyme(R) for Treatment of Pompe Disease

“Currently Rose Bud residents are giving their time, money and possibly more to one local child who waits for a second chance at life.

On September 17 the city will hold a carnival in hopes of raising funds for Kaidence Oliver, a five-month-old baby who was born with Andersen disease, a rare genetic disorder that affects the liver, spleen and muscles. According to the National Organization for Rare Disorders, Andersen disease, or glycogen storage disease type IV, prevents the liver from filtering glycogen, a complex carbohydrate that is turned into glucose which is then stored in the organ as well as other muscles.

Children affected by Andersen disease fail to grow and gain weight at the average rate and suffer from abnormal enlargements of the liver and spleen.

Kaidence’s mother, Amber Oliver said on August 22 the family will travel to St. Louis Children’s Hospital where Kaidence’s doctor, Ross Shepard, will give her body the go-ahead with a liver transplant this fall.
“The doctor said since we know about it, we should take care of it,” Amber said. “It’s all in the timing.”

If Kaidence is cleared for a transplant, the family will then leave St. Louis, with a pager, and go back to Rose Bud. They must then wait until a suitable O-positive donor is found, after which they must fly back to St. Louis, within 14-15 hours, for the operation.
Amber said the town has been supportive to her and her husband Matt and that besides fundraising, several residents have made the offer to donate part of their own liver if Kaidence’s first transplant is rejected. Amber said the liver is the only human organ that can regenerate itself.

Amber said infants could take as long as three months to find a suitable donor and heart disease may still be a problem after treatment. Amber also said they are hoping for an infant transplant, but if not doctors will take 1/4 of a liver from an adult donor and implant it into Kaidence.
Kaidence will then come home to Rose Bud where she will continue with occupational therapy as well as physical therapy. Amber said she will also take 9-12 medications after the transplant for four years, but could be on medication for the rest of her life.

Kaidence’s older brother, Keagan Oliver, was also affected by the disease, and died in September 2003 at Children’s Memorial Hospital in Chicago, after complications from his own liver transplant. He was 21 months old.

Amber said the family is hopeful, however, because unlike Keagan, who was diagnosed with the disorder at 16 months, knowledge of Kaidence’s condition was found out through amniocentesis while still in the womb.

“If it progresses too much there’s nothing you can do,” Amber said. Amber said children with the disease are also not “big eaters” because the weight of their organs gives them the sensation they are full.

Currently Kaidence is going through occupational therapy, to assist in the development of her muscles. Amber said Kaidence is only now lifting up her head but has yet to be able to lift up her body.

“Kaidence is really weak — the disease is also in her muscles,” Amber said.

The Olivers also have another daughter, Kiley, who is two. She was not born with the disease.

Amber Oliver’s mother Linda Thurman said the family has tried to remain positive through both Keagan and Kaidence’s illness and stay within their ordinary daily routines.

“I think we have to be,” Thurman said. “I think that’s the only choice we have.”

Thurman said the family has had the assistance of their church, friends and town residents in everything from gas bills to benefits — and that their circumstances would be much more difficult without them.

“We just live in such a wonderful community,” Thurman said. “We don’t even have to ask anybody to help, they just jump in and do things.”

The benefit carnival for Kaidence will be held Saturday, September 17, from 10 a.m. until 8 p.m. There will be performances by bands including Afrayed Knot and His Song In Word, a car show, pony and buggy rides, games and activities for kids, and a race car belonging to Mark Martin on display. There will also be a fireworks show at 8 p.m.

Amber said she has remained strong during Kaidence’s illness and the loss of Keagan through spirituality and focusing on her family.

“It will still hurt some days — but it’s just praying and knowing I’ll see him again someday — and knowing he’ll be Kady’s angel through this,” Amber said.
“ 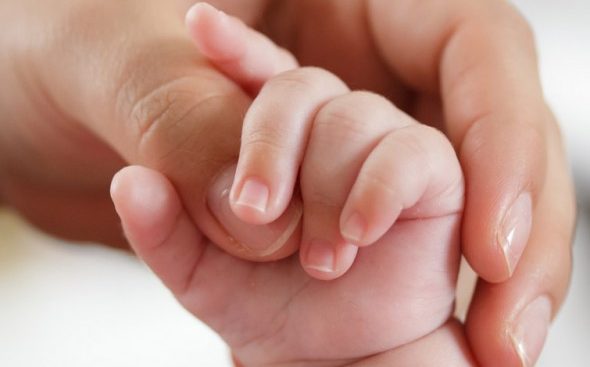